I was playing in the living room when I heard a loud growl coming from somewhere inside the house.  I’d never heard this noise before–it was piercing, menacing, ringing in my head, and I wanted to hide myself underneath the couch cushions until either the sound went away or until whatever was making the sound came and ate me up.  At that age, when I pictured burglars and thieves, I pictured shadows in a trench coat and a Sherlock Holmes hat, with bright white eyes and pointy nose–that was what burglars and thieves looked like in a poster on my neighbor’s window, reminding the neighborhood to beware.  This character was in a circle with a big slash going through it like the Ghostbusters logo, except the ghost was a shadow trying to steal my Thundercat toys.

My mom wasn’t there in the living room when the shrilling noise sounded, and I hoped with all my might it was a burglar and thief–I hoped it was something like that, because I didn’t want to imagine anything else that could make such a horrifying sound. I didn’t want my mom to be eaten up.  The sound went away.  I wiped my tears.  The sound came back.  I started to shout.  I ran around the living a few times and then through the hallway, to the bathroom where my dad was singing Old Man River while showering. I banged on the door pleading for him to save me, to save me from the monster coming from the garage.  He opened the door, shouting, “What’s wrong, what’s wrong?”  I yelled about the noise, saying, “It’s coming to get me!” And my dad told me not to be scared and that everything would be okay, and it was just the dryer giving the signal that the clothes had finished drying.  He ran, dripping wet and naked, to the laundry room and turned the dryer off before it made another buzzing noise.  He ran back to the bathroom and wrapped a towel around his body.  He picked me up and kissed my head.

“I thought it was going to eat us,” I said.
“Want some cornflakes?” he asked.
“I thought we were going to be eaten up by the dryer,” I said.

That night, I slept in between my parents–with one leg over my mother’s legs, and one arm across my dad’s chest.  I never wanted them to go anywhere again.  I wanted us three to stay in the bed for the rest of our lives.

They’re gone now.  They’re nowhere near me.  They aren’t in the living room, or kitchen, or the bathroom, or anywhere.  That loud terrifying noise ate them up.  I had arrived at the hospital with my friend’s mom.  Brett, who was my only friend in First Grade, didn’t come — he stayed with his dad, while Mrs. Sall took me to the hospital.  I was spending the night at their house.  Mrs. Sall cried as she drove, and I cried with her.

“Head on collision,” was what the nurse told us.
I pictured their heads colliding, but I knew she didn’t mean that.

Eleven years later–I wash clothes at the Clean And Fresh for a living now.  I wash them and dry them and give them back to smiling customers.  And every time I hand them their shirts and pants and coats, telling them to have a nice day and to come back, I think about the first time I thought I had lost my parents. 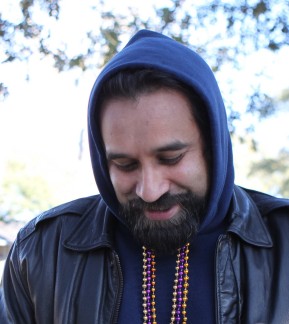 Shome Dasgupta is the author of i am here And You Are Gone (Winner Of The 2010 OW Press Fiction Chapbook Contest), and The Seagull And The Urn (HarperCollins India, 2013) which has been republished in the UK by Accent Press as The Sea Singer (2016). His first collection of short stories, Anklet And Other Stories was published by Golden Antelope Press in 2017. His novel, Pretend I Am Someone You Like, is forthcoming from the University of West Alabama’s Livingston Press. His stories and poems have appeared in Puerto Del Sol, New Orleans Review, NANO Fiction, Everyday Genius, Magma Poetry, and elsewhere. His fiction has been selected to appear in The &Now Awards 2: The Best Innovative Writing (&Now Books, 2013). Shome’s work has been featured as a storySouth Million Writers Award Notable Story, nominated for The Best Of The Net, and longlisted for the Wigleaf Top 50. He is a high school English teacher, living in Lafayette, LA, and his website can be found at www.shomedome.com.