“People don’t bring people into the desert at night,” I say.

He unfolds the legs of his telescope and tells me I can count the rings of Saturn if I want.

Through the lens I see a fuzzy planet turned upside-down.

We are miles from anything resembling life, and the air is cold and dry. Above our heads the night sky glows horribly.

“Jill?” he asks now. He has focused the telescope on something—the word he uses here is celestial. “When will you know?”

I look at a blurry collection of dim white dots. “As soon as they tell me,” I say, and move the telescope to empty sky.

My fingers are cold, and there’s a strange wind coming from whichever direction that mountain range is. A smell, too, I can’t quite describe, like disinfectant.

He hovers lightly over the soil as if trying not to leave a mark.

Last year, at the time of the eclipse, rooms here were renting for over a thousand dollars. Now we rent a queen room for just under a hundred. The brochure makes references to eclipse chasers, people who believe in the celestial and other worldly transformations. They come from all over to witness something that lasts only minutes.

I stare at my phone even though it’s late, and they will not call at this hour.

He tries to find something on TV.

My eyes are dry, and the lights in the room are haloed.

“Where were you during the eclipse?” he asks.

I make up something better than what happened. “I was on another continent,” I say. The truth is I was here, with the chasers, in a room my friend had booked three years earlier. What I had felt was this—I had felt nothing.

He finds an infomercial for kitchen gadgets, something that slices and dices, because two is better than one, isn’t it?

Life is just one moment then another. I do not love my boyfriend, but he treats me nice, and maybe that is enough for most people.

In the morning, I take his car keys and drive alone into the desert. I find the spot where I stood a year before and pretended to be interested in what was just a shadow moving across the sun.

My phone rings but I do not answer it. I know the caller is him, I didn’t leave a note.

What it looked like: white dots floating in grey masses. Aspiration is the word they use to describe the process of extracting cells—is that to make you feel hopeful?

I call him back and say, “The Sun is just floating in space, did you know that?”

He exhales slowly and says to come back to bed or says we’ll get breakfast or says none of this.

Last year so many people had transformations. They gasped and held their chests as if they might die. One woman fainted and her friend poured bottled water over her face to wake her.

When the eclipse began, the first thing I did was close my eyes. I thought it would make the experience better. I turned to my friend and asked, “Am I missing anything?”

“What am I missing?”

“Shouldn’t I be missing something?” 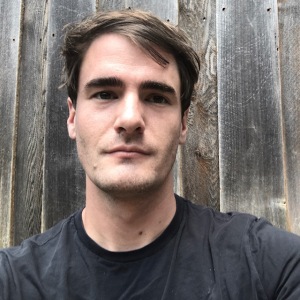 Nicholas Cook lives in Dallas, TX, along with his dog. His fiction has appeared or is forthcoming in Jellyfish Review, (b)OINK, 100 Word Story, A Quiet Courage, New Flash Fiction Review, Camroc Press Review, and elsewhere. His story The Peculiar Trajectory of Space Objects won second place in the Feb 2017 Bath Flash Fiction Award. Find him at @thisdogisdog.

School children walk through the Art Institute, two by two, holding hands. They are quiet. They are clearly under strict instructions, filing in behind their teacher, but still I think maybe.

“The Vitruvian Man” is superimposed upon himself and stretched within a circle, within a square. I lean closer. He is bare, anatomically perfect—he could breathe. In 1490, there must have been a real flesh man flayed with ink by da Vinci down to muscle, sinew, vein.

I sit on the front steps, eating sushi from the gallery cafeteria. He walks up the steps towards me. His security pass swings on a lanyard. His glasses catch the light and they flash, making his eyes invisible, then visible again. He leans down and kisses my cheek and smells of his last cigarette.

“What are you doing here?” he says, and it is kind.

He sits beside me, twenty centimeters away.

“You should come after hours,” he says. “I can show you around without the crowds.”

The sushi rice is sticky. I push my tongue across my teeth. I smile.

I have pushed my tongue along his neck, across his knuckles, down the ladder of his ribs. He was underneath my hands so that it was not his skin I felt, but his blood that hummed, hot.

His voice is low, so low, crawling around the pit of my stomach. It takes its time, scraping over and over, finding its old place.

He smiles, but I see it: she was always a dreamer.

How to tell him that I am listening intently? Not to his words, but his voice, the texture of it, the timbre, the base, the way it moves through me, the way it stays.

A group walks past us up the stairs and I slide five centimeters closer to him.

Almost two years ago now, he took off his shirt for me for the first time. The afternoon light got in around the edges of my bedroom blind and his skin ran with goosebumps. His clavicle was a wishbone, stretched across him. I wanted to break it in two. I did. I wanted him to push me to the edge. Sometimes he said, “Are you sure?” He pressed the words into my skin. Nothing hurt then.

I pay attention. The things I could tell him: clavicle derives from the Latin “clavicula” meaning “little key,” because the bone rotates like a key when the arms are raised. The clavicle is the bone most often broken in the human body.

We danced in a club and the music beat and vibrated through me. It soared. He leaned against me, his skin burning. He kissed me, pushing a pill from his mouth into mine. I swallowed. He smiled.

The crowd pressed against us, strangers, every single one of them. They slid against us. I could not breathe. He closed his eyes and tipped his head back away from mine. The chemicals hit my veins and they ran and ran.

“Studies of the Fetus in the Womb,” dated 1510-1512/13. Leonardo da Vinci drew a foetus with its knees raised, its head bowed and pressed against its hands and knees, hiding its face. The umbilical cord sweeps across its body. The womb is cleaved open, like two halves of a shell.

The children leave the gallery and run down the stairs, a tumble of legs, arms, small bodies, oversized backpacks. They laugh and shout. They push their faces to the sun and they grow, their cells dividing, multiplying, unfurling.

He was illuminated by the moon, its cold wash of lilac-blue light. Shadow lines of the window fell on him as he looked into the night.

He turned to me. “Nothing important.”

In bed, he slept and I drew my finger along his clavicle, first one way and then the other, finding the halfway point, finding the ends.

The gallery asked him to help curate an exhibition of Impressionist works at the Rijksmuseum in Amsterdam. He planned to travel through Europe afterwards.

“I don’t know. There are so many things I want to see. Cities I want to visit again.”

All I heard was I, I, I while he listed galleries, cities, icons.

A drawing of da Vinci’s compares man and animal: “Studies of legs of man and the leg of a horse,” dated 1506.

Another drawing shows a man inside a woman: “Coition of a hemisected man and woman,” dated 1492. She is far less detailed than him. She fades into nothingness.

He sent postcards. One was from the Galleria Nazionale di Parma in Italy, da Vinci’s “Head of a Woman,” dated 1500, painted in oil on wood. On the back he had written—she looks like you.

I studied that postcard. “What the fuck?”

Her hair was tangled, her gaze downward, fixed on nothing it seemed. I threw her away.

He puts his arm around my shoulders and he is hot all down my side. I see his clavicle beneath the collar of his shirt. Little key. Old friend.

“Have you seen the drawings of the human heart by da Vinci?” I say.

In 1513, da Vinci must have reached inside a human body and pulled out the heart, or somebody did it for him.

In the gallery gift shop, “The Vitruvian Man” is everywhere. I buy a fridge magnet and I don’t know why.

I walk back to the train and realize the actual man that da Vinci drew from in 1490 might not have been alive at all. In fact, he probably wasn’t. 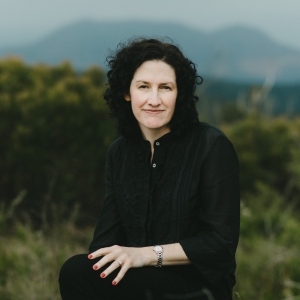 Melissa Goode’s work has appeared in Best Australian Short Stories, SmokeLong Quarterly, New World Writing, Split Lip Magazine, WhiskeyPaper, Atticus Review, (b)OINK, and Jellyfish Review, among others. One of her short stories has been made into a film by the production company Jungle. She lives in Australia. You can find her here: www.melissagoode.com and @melgoodewriter.