The Intimacy of Brushing Teeth by Jennifer Fliss

They meet in the bathroom. It is only 9 o’clock, and they are beginning their nightly routine. It will not take more than fifteen minutes, ten, five. She wants the day over already, and so, even though she is not tired, she will go to bed. Lay her messy mat of curls on her pillow and lament that she hasn’t done the wash in over a month.

He will brush his teeth with his mouth wide open, seafoam dripping, great big white horse teeth open and wide and abstract art-like sprays of toothpaste mar the mirror and the wall and the faucet.

They meet in the bathroom. She says she needs privacy. Why do you need privacy? I want to floss. So floss here. Do it here. In front of me. No. What do you need that I can’t give you Elise? What? And here we learn her name, but not his. Not yet. Is it important to the story? Possibly.

They meet at eight o’clock. Without saying anything, they agree that the earlier they can go to sleep, the better. Some might call it avoidance, but she has collected – printed, snipped, saved – several articles on the benefits of going to bed early, if anyone should ask.

No one has asked.

She’d wanted a double vanity, but when they were looking at houses, their budget said, nope. No double vanity. No granite. No garage, just a carport. The realtor looked at them with pity. And also, your shower will be made of plastic and you will have one bathroom in the whole house. (The real estate listing said ¾ bath, so not even a whole bathroom.) That is what you can afford and that is what you will have and that is indeed, what they ended up with. So that now, in the space of their tiny bathroom, in the fug of overripe-pear-mildew, they brush their teeth at the same time. Now, of course they could take turns, but they decided to go to bed at the same time and it had not occurred to them otherwise. Elise could say, I will now put on my pajamas, then I will brush my teeth and wash my face, etc etc etc. He could feed the cat. The cat’s name is Lars and he too joins them in the bathroom, sitting on the back of the toilet, waiting to be pet on the head or scratched behind his ears. But they arrive in the bathroom at the same time. This is the program for the evening: brush teeth, wash face, put on pajamas, feed cat, sleep.

It is Tuesday. They will have sex.

Their mouths will taste like peppermint. He likes this and she does not. In fact, she would rather not kiss at all. Just get it done with. Then she can proceed with laying her dense head on the unwashed pillowcase on the pillow stained with who knows what. She tries not to look when she changes the sheets. Does all that come from her? Her mouth? Is it her brains oozing out? Why are the stains on the pillow yellow? Really, more of a light rust color; is she rusting away? Her own saltwater turning her body into flaking metal?

Bernard is coming. See, now it is time to name him and did you not expect “Bernard?” Bernard is handsome and able to come just by thinking about a Big Mac. Bernard is younger. He was considered the catch in the relationship and Elise didn’t know about the catch and return laws, so she kept him. This was a mistake, but only now, only looking up at herself in the mirror above the dresser, only now seeing his baboon back-side as he thrust into her, only now, tasting the mint – that encroaching weed, in his mouth as he searches for her. She isn’t there. She’s in the mirror watching Bernard and the ur-Elise.

They meet in the bathroom and Elise says she has to pee. Ok. So pee, Bernard says as he spreads the toothpaste on his brush with the bristles flayed. He really needs to replace his toothbrush, Elise thinks, but doesn’t say. She’s not his mother. Elise says, never mind, I don’t have to go and with his toothbrush sticking out of the side of his mouth, Bernard pulls down his pants, and takes hold of his penis and pees. Hole in one, he says triumphantly, which Elise can’t quite make out on account of the toothbrush in his mouth, but she knows what he said. He says it every night. Has done since their honeymoon, after a long day of him out golfing and her at the spa. He spent seven out of eight days golfing while they were on the Yucatan peninsula. He regaled her of his day and how he got a hole in one with his new friends Marco and Raul, and he was peeing at the same time and the irony of that meant his joke would go on for years. Eight years now.

So in any domestic tragedy, we see ourselves. Where do you see yourself? Are you the catch? Are you the one who planned the honeymoon and did he say he didn’t care where you went as long as you were together? Do you have a bathroom with a double sink? Do you have two sinks, but live alone?

Bernard and Elise will be married for twenty two more years. He will die first. Many will attend the funeral. Elise refuses to say anything, to eulogize. Everyone thinks the sadness is too much to bear.

The night of the funeral:

Elise brushes her teeth alone. She picks up Bernard’s toothbrush – not the same one from two decades prior, but still it needs replacing, again, always. She will throw it out in the trash can under the sink. Then after she flosses, she plucks the toothbrush from the garbage and runs her fingers against the bristles. They’re still a little damp. She runs it against her cheek. It’s cool and tickles. She likes the feeling. She’s going to let it dry first, she decides. In bed, she looks at herself in the mirror. Her body takes up less than half the bed. It feels like an enormous bed, a big luxury, that she alone has such a large bed. 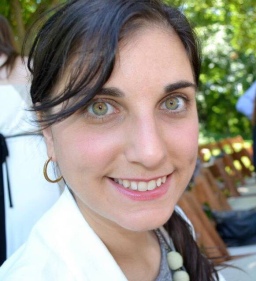 Jennifer Fliss is a Seattle-based fiction and essay writer. Her work has appeared in PANK, Hobart, The Rumpus, Necessary Fiction, and elsewhere. She can be found on Twitter at @writesforlife or via her website, www.jenniferflisscreative.com