Baby is the Big Man, Now by Exodus Oktavia Brownlow

Baby is the Big Man, now. Big Man of the newer, bigger house. Real big man by how hard he throws the baseball back and forth to his daddy.

Big Man wants to break, break, break his daddy down until all he becomes is a bunch of pieces he can take with him. Stuck-fuzzy-stick’ed to a knitted sweater’s innards like forgotten flu-season cough drops, the kind that mommy never finds until it’s too late.

What would be better was if he could break his daddy down well enough, to shift him into a fine little dust.

Big Man knew all the moves, already. It went fists to flesh to tenderize the meat. Then, nails to skin to shred it down. Sometimes you say things to it to make it behave even more. Sometimes the sayings worked better than all of the others.

If daddy would shift into a fine little dust, Big Man could put him in a pile, and sweep him into a dustpan. ‘Pour him in a curvy-lady time-glass to be flipped over and over again.

We are all are made from the earth, daddy once said, and it’s only a matter of moments before we’ll return to it. On the ground, mommy would lay showing how, and she would look so soft it was almost like she was sand. In the sand, twinkling edges of the black and blue void pooled, stars splayed around the edges of the skin for daddy’s impossible wishes to come true.

If sand was the most submissive type of earth because it could be shaped to become whatever you wanted it to be, because when it’s held in the hands, it slips below you and looks above like it’s supposed to, what, then, was dust?

In his hand, the baseball was like Genie’s lamp from the stories mommy read to him at night. Stories of better things to come, the only kind that held a place on their bookshelves.

The baseball was like Genie’s lamp not by how it looked, but by how it felt, as if there was something special inside that was supposed to be let out, and only he could do it.

His palm cradled against the stitches, rubbed them until they dissolved. 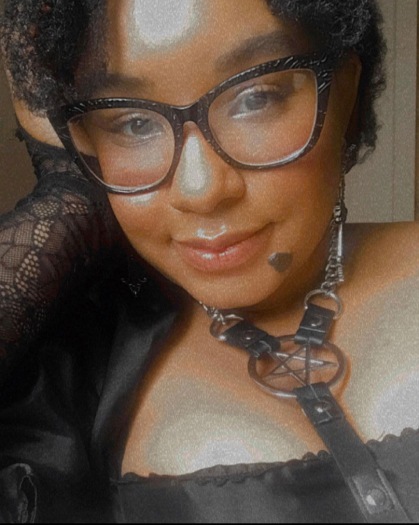 Exodus Oktavia Brownlow is a Blackhawk, Mississippi native. She is a graduate of Mississippi Valley State University with a BA in English, and Mississippi University for Women with an MFA in Creative Writing. Exodus has been published or has forthcoming work with Electric Lit, Hobart, Booth, Barren Magazine, Jellyfish Review, Chicken Soup for The Soul, Louisiana Literature, F(r)iction, and more. She has been nominated for Best of The Net, Best MicroFiction and a Pushcart Prize. Her piece “It’s 5am-ish, And My Father Tells Me A Story From His Time in Singapore” will be included in the anthology Best MicroFiction 2021.