And I take it, lift the slick comma of flesh right off the flimsy paper plate he juts gently but determinedly into my path. The man’s smile is a jumbled graveyard, each jaundiced tooth a mossy tombstone half-toppled by vandals or forced into a haphazard angle by tree roots heaving and flexing underneath the earth, threatening to burst through. Fueled by a winter melancholy twining my perennial nostalgia, I walk one hundred miles every weeknight over quiet sidewalks sometimes illuminated by wavering halos of lamplight, sometimes not. Now the man wiggles some fingers at me, not the goodbye I’d like but an invitation. With the shrimp tail pinched between my right thumb and index finger, I use my other hand to yank out one of the earbuds that reliably blanket my grey matter with dull noise and chatter. Even as I try to divert it, my mind thunders to the little black canister of pepper spray nestled like an heirloom bullet in the soft fleece of my coat pocket. A fleeting glow disappears into the dark crosshatch of towering pine branches as they welcome the sinking sun; the desolation of this short, tucked away road, creaky little homes buttoned up tight, breathes around me. Still, I smile. Smile at this man whose wiry gray hair poking from under a brown fedora rustles a bit as he bounces on the balls of his feet like he can hardly contain some good, delicious secret. Where did he come from? “Better with a smidge of cocktail sauce,” he tells me, his voice the strained chirp of a red-bellied robin caught, improbably, beneath a sudden cascade of dense snow. The plate, loaded with tiny carcasses, hovers between us. Glitter polish chipping on my nails, framed by tattered cuticles, glints faintly in the dying light when I step forward, swipe my shrimp through the pool of red. “Thank you,” I say. The pepper spray in my pocket: My mom halved a thirty-minute drive down sparse late-night highway to deliver it to my apartment, frantic after, in a moment of stupidity, I admitted that another man — on another of these hundred-mile walks — a stocky cannonball of a man in a blue windbreaker — had grabbed me from behind then barreled away. It’s been eight years since I’ve had a bite of meat, since I suffered through that one slaughterhouse documentary in college. But I chomp down immediately on the shrimp’s tough flesh as I walk away from the man with the graveyard smile, gnash the muscle, the ghosts of nerves rendered unfeeling between my molars. Heading toward home now through the dark chill, I flick the hollow shrimp tail onto some unknown neighbor’s front lawn. 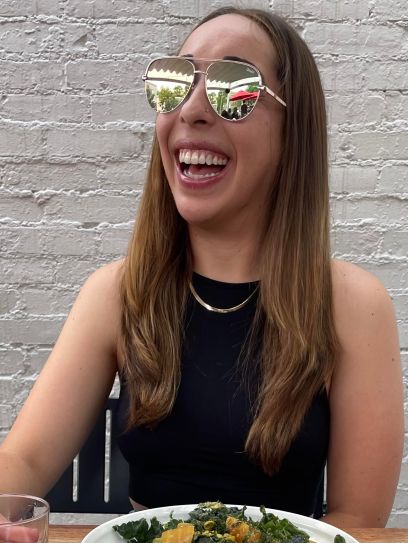 Andrea Frazier is a writer who lives in Pittsburgh. Her music essay “Let’s Get Fucked Up and Die!” is published in Drunk Monkeys.