That Which We Call a Rose by Samantha Costanzo Carleton

My mom thought Samantha meant strong: The female Samson, destroyer of limits and all variations of “no.” But it means listener instead, and I listened to her lest I take half a step outside of the route she mapped. I strained so hard to hear that when I finally did become strong, it surprised her. I tore up the tracks with my own bare hands and told her no—no, thank you. Now I listen for signs in the sound of autumn leaves, for something that falls in my fingers and melts like a snowflake.

In Paris, I thought of Marie, but we’d never been that close. She belonged to nearly every girl in school—the ones who didn’t get diamonds, at least. My sister was given Francesca. So unique! said the other Something-Maries. I didn’t expect to love Paris, the city that slumbered in every heart like Marie stuck in so many names. But something in me understood the gardens right away, the river and the islands and the stone. I have only ever lived near water, after all.

The confirmation teacher told us all to pick new names, and I don’t think he ever said why. We took classes but lacked understanding, said prayers because we should. I looked it up. A new name stood for change and maturation, like an oak. It meant we were standing on roots. I knew who I wanted to be right away. For me, it had always been Lucy: a name that meant light in the darkness of winter, a flicker of faith buried deep and begging for air. There is no Santa Esperanza, but one day, I’ll name a daughter after hope.

Once upon a time there were five Costanzo brothers, all rascals who snuck into golf courses at night and slid down sloping greens on blocks of ice they stole from their jobs at Foster’s Freeze. Then one of them said the wrong thing, and one of them threatened a war, and that was the end of them all for so long, I forgot I was also Italian. I was cien por ciento Cubana instead, no hyphen-American there—just Cuban like Granmamá Lily, who always dropped the S’s at the end of Spanish words. Well, maybe 95 percent. I have always been my father’s daughter, after all. We feel too much and think too much and yet, we still believe the world is mostly good.

I worried, at first, if I was committing treason, and then, I didn’t care. I chose the season and colors and cake. I wrote a check for the photographer with money I made myself, and handing it to her felt like taking one last look at where I’d been. I chose the man and the life and three names, performed the surgical procedure to remove and rearrange them and then stitch them in a line. I wanted to mark the transition with more than a dress and a party. I wanted it to show like tattooed ink. I’m sorry, Marie (just a little). But love is a decision. 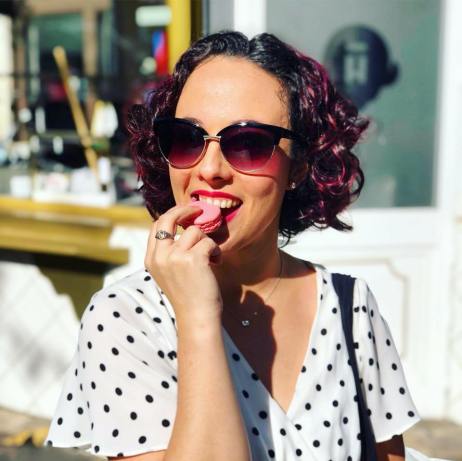 Samantha Costanzo Carleton is a writer from Boston. Her work has been published in The Cabinet of Heed and Full House Literary Magazine. She really wants to know your middle name.