My Mother is a Plant by Tara Campbell

A philodendron, to be exact.

At first, people laugh when I tell them, and after a few whimsical comments the conversation moves on. But the longer you know people, and the closer you get, the greater the likelihood you’ll wind up talking about parents again; and when my mother persists in being a philodendron, friends and lovers invariably quiz me on how it happened.

“Do you remember the moment you were born?” I ask them.

Most will say no, but some will say they’ve seen video footage of their own birth, which I think would be traumatic, hearing my mother scream to produce me.

Their parents told them.

That’s not to say I’m incurious. I’ve watched my mother, sunning by the window in her maroon-glazed pot, wondering how what she tells me could be true.

Sometimes at the change of seasons, spring or fall, she decides to give me a sibling. The leaves along one of her tendrils begin to yellow, then dry up. I pluck them off when she asks me to, and when enough leaves are gone, she has me cut off the portion at the end that’s still green and growing. I plant it, and about eighty percent of the time, it survives, becoming my new sibling. She even lets me choose their names. I’m running out of counter space for my family.

Earlier, she says, she used to bear children directly in her pot, their new green heads shooting up from the same soil. She says that’s how she had me—but as I mentioned before, I don’t actually remember it. How could I?

Once in a while, though, I have a dream where I’m standing in a pot next to her. I’m tiny—I can look up at her, sprawling in all directions over my head—and I’m buried next to her, up to my knees in dark, spore-rich soil. She normally likes her dirt on the dry side, but in the dream we’re being watered. I hold on to the tip of one of her leaves as the water washes over us. Her skin is smooth and cool and plump against my fingers.

Tiny organisms in the dirt come to life with the moisture, wriggling against my ankles and toes. I giggle and wiggle my legs, and before I know what I’m doing, I work one of my feet loose from the dirt. As soon as I lift my knee, a wave of anxiety surges up my body, bottom to top, and I clutch onto my mother’s leaf, and feel it crunch in my fist.

Then I wake up.

I don’t know who’s watering us in the dream. Probably Jim. I’ve known him as long as I’ve been alive. He’s the one who taught me how to water my mother, and who fed me and clothed me and did everything my friends’ parents did for them growing up.

But he’s not my father.

I have no father. I’m a product of asexual reproduction. I learned about it in high school biology, which was a while ago, but as far as I know it’s still a thing. Plus, I don’t look anything like Jim; he just adopted me. I take more after my mother.

That was a joke. I don’t look anything like her either. My eyes are brown, not green.

My mother wasn’t always a plant. Once, a long, long time ago, she was a lovely young woman, which, as in all old legends, meant she was barely more than a girl. And she was beautiful, and pure, and the first part excited men, and the second part excited them even more. But she didn’t want any of them, so, as mythology dictates, she got used to being chased for being chaste.

And one time, as she was being chaste-chased, a goddess from the ancient pantheon took pity on her and decided to intercede. My mother’s foot hit the ground and rooted, and her body stretched and greened forward, sprouting leaves as she tumbled ahead in a tangle of stems and shoots. The man chasing her tripped on her roots, grasping an armful of air as he fell into the fresh mass of vegetation on the dirt. He found he couldn’t get up, and the more he fought to untangle himself, the tighter she held.

Sometimes I see myself in her. My eyes aren’t green, but I am tall and lanky, so maybe there is some resemblance. But I think that’s more wishful thinking, wanting to see something that isn’t there.

I asked her once what happened to her other original children, the ones born close to her in the dirt like me.

“They withered,” she said. “I didn’t know how to be a mother yet, so they shriveled and died.”

I stroked her leaves to comfort her, and my fingers came away wet.

The man who chased my mother was never heard from again. But then, neither was she, really. She never got to go back to her family, or see her friends, or grow up and fall in love and learn to have a family of her own. She calls me her first and only success.

She doesn’t remember how long ago she turned into a plant, or what she was called before. Sometimes she tells me her memories of that moment, of tripping and sprawling forward from girl into greenery. She thinks her hair was dark, her skin olive like mine, her dress white and flowing. But perhaps, she admits, she was too influenced as a child by storybooks with pastel-colored pictures of smiling gods and fleeing women stretching leafy fingers toward the sun.

Maybe it didn’t really happen that way, or in ancient times. Maybe it wasn’t that long ago at all.

Maybe not all plants are green. 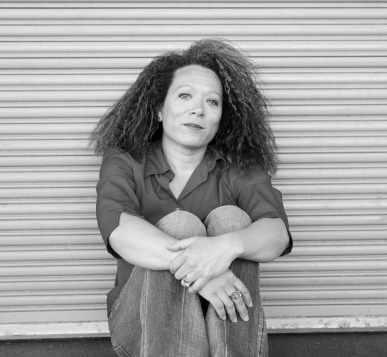 Tara Campbell (www.taracampbell.com) is a writer, teacher, Kimbilio Fellow, and fiction editor at Barrelhouse. Prior publication credits include SmokeLong Quarterly, Masters Review, Monkeybicycle, Jellyfish Review, Booth, Strange Horizons, and Escape Pod/Artemis Rising. She’s the author of a novel, TreeVolution, a hybrid fiction/poetry collection, Circe’s Bicycle, and a short story collection, Midnight at the Organporium. She received her MFA from American University in 2019.