I Wouldn’t Give Up by Kyra Kondis

The new girl at school is the missing girl, the one from the back of the milk cartons we get with lunch. My friends don’t believe me but I’m sure of it. How do you know? they ask. How can that be true? I show them the milk carton and they say, Don’t be stupid, Ann. That looks nothing like her.

The girl is quiet. Her arms and legs and body are thin like she’s been running a lot, and I wonder if she left on purpose or if someone took her. Maybe if they took her, she isn’t allowed to tell anyone. I imagine her family on the opposite coast, lighting candles every night and crying and waiting for her to come back. She thinks about them and is too sad to speak. I wish I could say to her, hey, I know what’s going on. You can talk to me.

The girl has soft brown hair and brown eyes. The photo on the milk carton is in black and white, but if it were in color, I’m sure it would capture that softness and brownness, maybe not perfectly, but as well as it could. I wonder how come our principal hasn’t recognized her, why he hasn’t called the police. I wonder if it’s a negotiation thing, like he has to pretend not to realize so he can make a deal with the captor. I wonder who else is in on it.

The girl is surprisingly good at kickball, and I think this is self-defense, like she’s preparing to bust herself out. When it’s my turn to be pitcher in gym class, I always give her curveballs, so she can get better at being ready for anything. If she misses or hits it out of bounds, she stamps her foot in frustration, and I smile my most encouraging smile, so she knows that I get it. I understand.

The girl is never picked up in a car. She always takes the bus, or if the weather’s good, she walks, stopping to buy Hot Cheetos from the corner store that the cooler sixth graders say they shoplift from. I wonder if it hurts, that fleeting bit of freedom before she goes home, if it can even be called home. I walk behind her for a little while, to make sure she doesn’t go missing again, even though I live in the other direction. If she ever noticed me, I’d have to pretend not to see her, because saying nothing is better than saying something dumb, especially to a girl who’s missing.

And then, she isn’t on the milk cartons anymore. Instead, it’s a little boy with an overgrown bowl cut, a rat tail slung over his shoulder. It’s sad, how people gave up like that—the police, the milk carton makers, the FBI.

There, my friends say, you can stop obsessing now, it was obviously someone else. I nod and blush and eat my cafeteria pizza, but look for her out of the corner of my eye. I wouldn’t give up on you, I think, as if we’re telepathically linked. 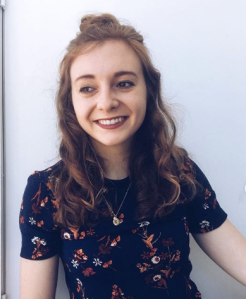 Kyra Kondis is an MFA candidate in fiction at George Mason University. She is also the proud owner of three (3) small cacti and is the Assistant Editor-in-Chief of So to Speak Journal. Some of her work can be found in Matchbook, Pithead Chapel, and Wigleaf, and at her website, kyrakondis.com.