No Such Person by Alina Stefanescu

“There is no such person over the long term.”
–Alain de Botton

I.
When I leave my college sweetheart, it’s with conviction in the sweetness of his heart. He’s good in a world where goodness is held against men. He’s my best friend.

He tells me our cats curl their fuzzy bodies into the absence my shadow leaves on the couch. He texts photos of my former butt-marks with kitties inside. The cats thrive.

“Have you lost your marbles?” my mother wonders. She loves him. He is the best.

“I left my marbles,” I say. This is a mantra: an action asserted contra what was left.

II.
The first sign: an ache in the breasts, a tenderness. I have a new man now, but no kitties. Other fellows showing interest. A few dogs. More mammals than one should manage without calculus.

I have a new mantra: “All balls in the air.”

The new man says pro-life. Another man says lesser evil. All men say civil society will take care of it.

I keep the balls in the air, glance around the lobby and wonder, “What civil society?”

Where there is a child, I see a woman attached. Kids are like urchins poised atop mommy rocks and men are like Starburst. Men are like candy, not stars.

A darkening of nipples. A different man says job creation. Some men say down-sizing is the future is necessary. Men say what it takes to make America great again.

I lean in–that’s what. I lean into the toilet. What bubbles from my mouth is collateral damage. Or baby thighs, fetus eyes that can’t see the shell they’ve bloomed inside.

III.
“She can’t really be pregnant.”

“Now she’s fucked herself in your mother’s pussy.”

They speak in Romanian, using expressions that don’t pass through customs without gaining weight, without becoming baggage. In my native tongue, the most potent curses are attached to mothers.

The green light of my grandfather’s hearing aid is on. That’s good. He doesn’t know I’m pregnant yet. I imagine his mother’s pussy is still safe.

On these stamps, the nation is a young mother bearing bread loaves, daisies, and babies.

The man brings an unlicked stamp to his nostrils and inhales the sticky side. It’s pure, untainted, high-value.

IV.
I stay with my childhood friend in her Georgetown mock Tudor. She has a son and a recent divorce.

“Who knew they could be lanky at six?” I wonder.

Her brown eyes thicken with boxed pinot. “I didn’t know anything,” she admits.

As she speaks, a moth flings its gray body against the glass doors. Reggae seeps into the yard, soft enough to sound belligerent.

I head down M street to procure sashimi. Taxies and bureaucrats light the dusk with dull car horns. On the sidewalk near the park, a doe nibbles oak leaves. Her eyes lift, meet mine, in the middle of this furious city, and I know we can live through anything.

V.
A silver locket lacking a photo inside the heart. It was autumn. A leaf fell from the dogwood, orange imposed across the red of his sports jacket.

I brushed the leaf from his shoulder. Laid the locket in his mouth. Said: “speak.”

VI.
When I left him, the interlude between day and night tangled like underbrush at the edge of a forest. A blur of various light, cats, special pillowcases, embroidery floss, his best soup, our french press that traveled to Paris. The fur and muscle of dark was muzzled by these memories.

I want to make love to every human in the hour before their suicide. I want to be the last salt they taste, a final sweat, a swear word.

VII.
Instead, I marry the mammal I can’t forget.

I tell him: “When I leave you, red and pink valentine hearts will be awning the pharmacy aisles.”

He thinks the plot is strong, but the characters need developing. He’s right.

I sit with the notebook and untangle the arms of an unwritten story.

He accuses me of functioning under the availability model for marriage.

My lawyer friend accidentally had sex with a transient man, a regular known round the parks for his avid vagrancies. She didn’t realize it until she volunteered at the Sunday Night Soup kitchen.

“That was just a story. Not your real friend,” he says.

“That’s your thing, isn’t it, Alina? Liking people you make up to suit a story?”

In the morning, it’s hard to tell the difference between a dream and a desire. I wanted that Woman they advertised.
Desire inflames hope. I let the man hold my hand. “We can make this work,” he says.

He looks fabulous in my Che t-shirt. I let myself imagine the next part. Imagine men become solid mammals waking to diaper babies. Let myself want more than he promised. All of it.

I want to shepherd a revolutionary love through the strip malls of Alabama. I want a beloved community. And I do. I do. But when I pass the Victoria’s Secret, the eyes of those angels own me. And I want that Woman that flies off the American shelf. 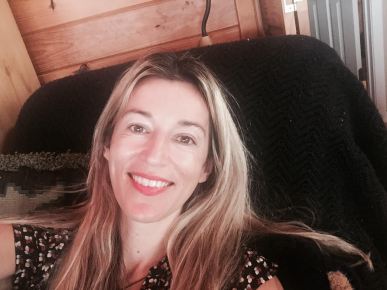 Alina Stefanescu was born in Romania and lives in Alabama. Her poems and prose are recent or forthcoming in DIAGRAM, New South, Mantis, VOLT,
Cloudbank, Prairie Schooner, NELLE, and others. She serves as Poetry Editor of Pidgeonholes, President of the Alabama State Poetry Society, and co-founder of the Magic City Poetry Festival. Her first poetry chapbook, Objects in Vases (Anchor & Plume Press, 2016) won the ASPS Poetry Book of the Year Award. Her first poetry collection, Stories to Read Aloud to Your Fetus (Finishing Line Press, 2017) included Pushcart-nominated poems. Her debut fiction collection, Every Mask I Tried On, won the Brighthorse Books Prize and was published in May 2018. More online at www.alinastefanescuwriter.com or @aliner.