When I was four, we grew a watermelon in the backyard garden, under the split-trunk oak. Every morning the screen door would rattle from the passing of my two velcro sandals and the neighbor’s dog would bark as I squatted, square knees and dirty hands, to inspect that watermelon.

It swelled like summer passes, hair grows, knitting knots, so slow you couldn’t tell it was happening until one day it was bigger than I was. Sweet striped shell, vine and leaves. The critters ate all the tomatoes but they left that watermelon alone. Indomitable watermelon, under the sun and the tree and dog’s crossed eyes.

Kelly says I would sit out there next to the watermelon in my little yellow dress, toes in the dirt, talking at rocketship speed to my variegated friend, making squares with my two sky-sweeping hands. Outlining that craggy four-year-old universe to a very good listener.

July I tried to catch it in the act – get up early, tiptoe down the stairs, edge the screen door open far enough so that (holding my breath) I could fit my round kid belly through the gap. The moon, enormous, hung in the hot air. It probably knew how that watermelon just kept growing, but Mom’s following feet kept me from asking.

One morning it sat smug in the sunlight, self-satisfied in its mysteries, and the next it was a crater in the August earth, a severed stem trailing leaves. Our biggest white bowl overflowing with red flesh, a spill staining the tablecloth. Kelly put a whole slice in her mouth at once and the juice ran down her pufferfish cheeks, dripped in red rainspots onto her turned-up collar. 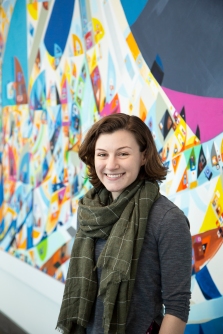 Ellen Ellis’ work has been a finalist on Glimmer Train’s Very Short Fiction Top 25, and received the Margaret C. Annan Memorial Prize and SCBWI Student Writer Scholarship. She’s based in Chicago, and her story “Noise” was published in Wigleaf.