After she moves a load of warm laundry from the dryer to the folding basket for the fourth time that morning, she gathers the detritus of her family’s t-shirts and socks from the lint trap. She wonders (also for the fourth time that morning) if there isn’t something to be done with the lint itself. She fingers the fluff of it. Could she use it to…stuff something? A tiny doll family? Tooth fairy pillows? She sneezes.

When she was a child in Oregon, her mother sent her to a school where they spent all day dancing and painting and rolling sheets of beeswax into tapers. In the 3rd grade they were given tufts of colored wool, which they repeatedly stabbed with a needle until the fibers locked together and became a sort of sculpting material. She was never very good at this. She often pricked herself by accident and then braced for blood that mysteriously failed to appear. The other children bent their heads to their task and produced gnomes and fairies, elephants and foxes. She made balls of various sizes. That’s it: balls.

She recalls a news segment featuring a frugal couple who transformed plastic grocery bags into area rugs. Was it area rugs? Or curtains? She considers the possibility of using the lint to create kneepads and headbands to protect her four children—or wait, yes, all children!—from the dangers of asphalt and ceramic tile. She envisions wild success in the money-making arena of youth sports. What if she became celebrated for halting the outrageous uptick in childhood-sustained concussions? Concussions, kidcussions, KID-CUSHIONS, she thinks with satisfaction, wondering if she should have gone into marketing instead of laundry.

And if she does this, will her story go viral, everyone marveling at her domestic ingenuity? Will the lint fill up the space near her solar plexus, where she once carried warm thoughts of her husband? Could she fashion it into something flirty and beguiling to turn his head? Could she prop herself against it to remain alert from 3:00 to 5:00 in the afternoon? Could she use it to plump the lines that have formed on either side of her mouth, or to refill her once magnificent breasts? To muffle her screams to plug her ears to cushion her long and graceless fall. 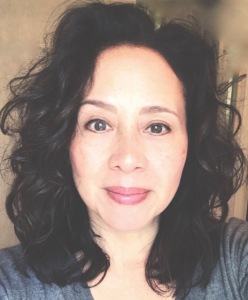 Veronica Montes is the author of Benedicta Takes Wing & Other Stories (Philippine American Literary House, 2018). Her online fiction can be found at SmokeLong Quarterly, Spelk, and CHEAP POP. She is Managing Fiction Editor at daCunha.global.