The Sound of Ice by Megan Furniss

They say you can only see us from space. From there we are tiny flicker pinpricks, a join-the-dots circle of light, bobbing on a dark sea. You would need to go to space to know we exist.

I wake up to the sounds I know. There is the lonely yawning of the big ice, a creak and scream. There is the huge, continuous slam of ocean against that wall of ice. Closer. I know that ma’s hands are pulling the rope and I can hear her arms brush up against her skirt and apron. Shook, shuck. Shook, shuck. Every day the rope is pulled. Sometimes the wooden bucket attached to the rope has hand written notes of greeting, bits of precious chocolate or scraps of fabric for sewing. Messages from the other lighters; women like sharing small gifts. And of course, there is our daily block of ice.

We are known as the lighters. In our circle there are 167 tiny boats, each with their own mother and daughter crew. We light a circle of protection for the iceberg. We defend it with our lights. We protect this valuable resource of pure water from thieves and pirates who might stumble upon us. You would say how could we do anything? Ma says we are nothing more than an early warning system. They don’t mind losing us. But we are safe here.

The waves slap against wood. I peep out. It is dark. We sleep in the day and wake and watch at night. Let them know by radio if we see anything strange. We have learned the sounds of water and ice.

Ma says my thirteen-year-old body is typical. I need sleep. Hours of it. Ma says, “Lucky we out here, with all the time in the world. Lucky for you.”

“Ma, ma. Let’s have tea. It’s cold ma.” I drag my coat off the floor, pull it under the bedclothes, grunting and struggling to put it on without letting any air in at the sides. Inside the coat pocket is my purple woolly hat and I stick my head under the blankets to put it on. It smells and I gag. When I burst through ma is laughing and my heart lights up. “You been warming yourself with farts again?”

She is chipping at the ice block and scraping the shards into a pot. Then straight onto the burner to boil for tea. Each boat gets a tiny block of the iceberg every day. “It’s the price it has to pay, poor thing.” Ma says.

I shuffle across the creaky wooden floor to the tiny cupboard and open the tin. Wrapped in oilcloth with tissue paper on the inside to keep them dry are ginger biscuits; one for each of us, one for every day of the month. There are two left. That means a delivery tomorrow. A month’s supply of everything we need will be parachuted into the water near us and we will haul it in. Also, once a month the circle of boats is ruptured when the huge icebreaker comes to take a chunk of the iceberg to shore.

The bell tinkles. A fish. Ma gets there first, opening the hatch in the floor and pulling a thinner thread this time, until a silver fish flops up, gaping, bringing with it the cold, and salt on the air. I stand with the hammer and aim perfectly, crushing its head. I whisper thanks, like a prayer. I hate the moment of killing.

I clean the fish. Silver fish scales collect like extra nails on the ends of my fingers. The TV screen shows the sea, the camera moving in a circle and following the light, over and over, forever and ever. The light makes the waves white, then grey, then black. Suddenly the beam passes across the surface of the iceberg and the TV screen goes completely white, no end or beginning.

Whenever I see that I cannot breathe. It is the same cannot-breathe-feeling from before, when we were not here, just a family, and the man-my-father has me in a chokehold, his body behind me, and shoving.

I come back. I have pressed the scaling knife along my palm without noticing. Ma hands me the tea towel and I wrap my hand. She looks at me and I start breathing again. There is sorrow in her face, deep and long, but the fear is gone.

Before, at the women’s shelter, ma had panicked. We had run with nothing when she had come home early from work and caught him up against me and me not breathing, in a chokehold. She had struck out at him and we had run, even as he got to his feet, threatening to kill us both. “He will find us,” she had cried, “and then he will kill us,” over and over. The shelter knew where nobody would find us. We would be invisible, but we would be the lighters. Like many before us, and many to come. That’s where people like us go.

The fish sizzles in the shallow pan. I sip tea, holding the mug one-handed and watching the liquid move in time with the waves outside. Waves slap wood. Tiny tea waves slap the china wall of the mug. The ice groans and sighs. Ma runs her fingers along the tiny bookshelf. “We’ll have some new ones tomorrow. Just think.”

She holds up a worn copy of Roald Dahl’s BFG. “Imagine, the queen of England. Imagine a giant, even a little one.”
“And snozzcumbers ma, and whizzpoppers.” Imagine.

I look at the TV. The beam moves across the waves. White, then grey, then black. We dip our ginger biscuits in the tea, just long enough for the edges to start crumbling away, then we stuff them in our mouths and suck. 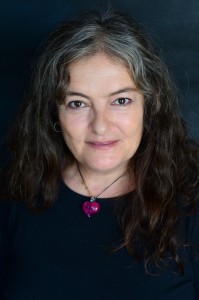 Megan Furniss is a playwright, writer, theatre director, actor and improviser. She loves words and stories and making stuff up.