My Mother’s Ashes by Elaine Chiew

A cold front is coming in. The columbarium calls to say they’re open Monday to Friday, 9:30-12:30, for collections.  I recognise the urn when I go there; it’s Mother’s Ming Dynasty replica from her one trip to Hang Zhou she thought was such a ‘thrilling bargain.’  The negligently-dressed director sits me down to go over some do’s and don’ts: sports grounds, waterways, and National Trust grounds are popular choices, but “it’s not great for the next person who wants a picnic.”  His tone is jocular, but he’s not remotely funny. One grieving relative blew up ashes in fireworks, another pressed it into vinyl. Just imagine. I could tell him I’m driving to Venice, heading for the canals and I might trigger an anthrax scare, but I don’t.

It’s 1647 kilometres and will take approximately 16 hours. Mother’s strapped to the passenger seat, riding shotgun. In Warley, when I tank up, I explain to Mother we’re not flying because I can’t abide the thought of her sitting on my lap for two hours. She hates big bodies of water, anything looming large above her head. The urn wobbles all along the M25 to the Channel Tunnel (double-whammy there) but once across, the lid finally settles. Passing Calais, I see several car accidents, the wreckage looking like hulls, bodies. “Do you remember we’d taken a trip to see the German bunkers?” Where our words were slung as raw wounds—me, how does it feel to have everyone hate you! She, well at least they bother to hate me! But why shatter our fragile détente? Another road trip memory intrudes: detouring through Lyon, she demonstrated the art of the quicksilver word (your simian children) and the wounding minute gesture (the elegant shift of the body away from speaker mid-sentence).  Celestial accusations against one’s forebears can be heard, and the urn shakes from side to side, as we’re buffeted by sleet and wind down the A4.

The rental car stalls somewhere near Reims. A French mechanic shows up, quite dishy in a nondescript fashion: my type, as Mother might sneer. He shakes his head at my babbling, disrespecting my French. I finally work out I’ll have to hole up in a B&B while waiting for a new rental car. Mother always loved the Italians and hated the French. Every year she’d disappear off to Venice, and it’s a mystery what she did there. I imagined her roaming around St. Mark’s Basilica and the Doge’s Palace—gaining auras, bargaining like a cheap shrew for embroidered linen, flirting with the camarieri in the piazza while cursing tourists, family and pigeons. “Well, there you go,” I say to the urn, “just desserts,” and deposit her on top of a chest of drawers.

A pock and a thwack against my window-pane at night.  A mystery awaits in the dark. Gasping out of deep slumber, I stumble against the chest, trying to turn on the light. The urn falls and shatters.  I cut my foot on pieces of blue-washed Chinese hills and tiered pagodas. Blood smears the carpet but there’s no ash.

Shock. Where did the ash go? Then a sharp pain, tentacling away from my foot. Spreading. My heart shifts, locks. It’s my mother, still jabbering, not letting me go. 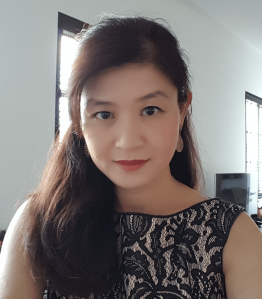 Elaine Chiew is a writer based in London and Singapore.  She’s the editor/compiler of Cooked Up: Food Fiction From Around the World (New Internationalist, 2015), and her most recent stories can be found in Potomac Review, Smokelong Quarterly, and Jellyfish Review. She’s also won prizes (most notably the Bridport Prize) and been shortlisted in competitions, including the BBC Opening Lines, Mslexia, Fish, etc, and named Top 50 Microfiction by Wigleaf and Top 25 in Glimmer Train’s Emerging Writer’s Award. She has a law degree and an M.A. in Asian Art History.