All the Best People Die Young by Hannah Gordon

Callie once told me she felt like dying all the time. She couldn’t envision herself living past twenty-one. Said when she dreamt, she was always in her twenties. Never older.

All the best people died young, she said. Poets, musicians, actors. Artists struggled. She considered herself an artist in the making.

I liked lying in her bed and listening to British rock bands. She hardly ever stood still, so while I would lie there, letting Morrissey fill the air around me, she would pace her room, trying on random tops that littered the floor or grabbing at odd books, flipping through them briefly before tossing them back to the ground, as if she could never quite find what she was looking for.

Every day after school we’d either drive to my house, where we’d eat Oreos and watch Dr. Phil and Maury until my Mom got home, or we’d go to her house, where her parents were never home. She’d make us banana pancakes, and we’d eat them on the deck, overlooking the lake. Sometimes she’d smoke a cigarette, relics from her last relationship.

“Matt Davies?” I’d asked her when she told me they were official.

“He’s eighteen,” she said, sweeping her lake-soaked hair into a high ponytail. Then, “He can buy us cigarettes, LeAnn.”

Callie lived fast. Walked fast, talked fast, drank faster, smoked faster. It was as if she thought someone was about to take it all away—just like that. When her dad actually did take away her cigarettes, angry tears ran down her face, and she told me, “I can’t wait to fucking move away from here.”

It was assumed I’d just go with her. Like I’d follow her until she died young. I never asked what I was supposed to do after that.

On the weekends we’d steal money from her dad’s sock drawer and take mini road trips. Usually we drove down into Ohio, and we’d laugh at how bare it was. Like life didn’t exist there.

“At least we don’t live here,” she’d tell me, hand out the window, two-dollar sunglasses on, one cigarette in her lip and another tucked behind her ear. I could barely hear her over the roar of the radio and wind.

Callie wanted out of Michigan. She needed out. We lived in the Irish Hills, practically a ghost town, full of run down Wild West theme parks, haunted lighthouses, and men in wife beaters who spit tobacco outside gas stations. They’d whoop and holler whenever we’d stop to fill the car with gas. Callie didn’t care. She’d lean against the car, long legs gleaming in the sun. I’d hunch next to her—wearing all black because she thought it was cool—and scowl at them.

“Men like that don’t deserve your time,” she’d say. “I bet they have daughters our age.”

Callie had daddy issues. That’s what the other kids in class told me.

I often wondered if I really loved her. Or if I was just going along with it until something better came along.

One night, she wanted to become blood sisters, so we sliced into our palms and held hands until it ran red down our arms. When we let go, you couldn’t tell which blood was whose, and Callie said this was the whole point.

“Now I’ll be with you always,” she said. “And when I die, I won’t really die, because my blood will flow through your veins.”

She didn’t die young, though. A few years later, she got married. Has a second kid on the way now. I went to the wedding, but I sat in the back, and when it came my turn to congratulate her in the processional, I told her she did it: she made it past twenty-one.

“You always used to say—”

“—I was a dumb kid. It’s so good to see you.” She squeezed my hand tightly, and I wanted so badly to check if the scar was still there. I didn’t, though, and just like that, she moved the line along.

One night during junior year, we snuck out of her house and rolled my car to the street, a bottle of jagermeister in her purse. We met up with two of the guys from school and drank the whole bottle that night.

I woke up the next morning to her lips against my ear. “LeAnn. Let’s go.”

The sun was just beginning to rise over the hills, illuminating all the skeletal buildings, empty for twenty years now. Everyone always said how great the Irish Hills were in the eighties. So full of promise. And then it all crashed down.

We crawled in through her basement bedroom window, into bed, dirty clothes still on. The following week, the boy’s mom found a bracelet in the house. That’s how she knew we were there. Callie took the fall, though. Swore to her parents it was just her.

I really didn’t know if I would.

“Hey,” I said that morning in bed.

“What?” she asked, her licorice breath washing over my face.

“Do I look like a movie star when I kiss?” I asked, thinking back to the previous night, how we all kissed each other in the kitchen, laughing at how funny it all seemed.

I awoke sometime later. The sun was low, so I assumed it was mid-afternoon. Callie was still asleep next to me, her hand extended across the bed, a jagged scar on her palm, her fingers tangled up in my hair, like she’d been reaching for me. 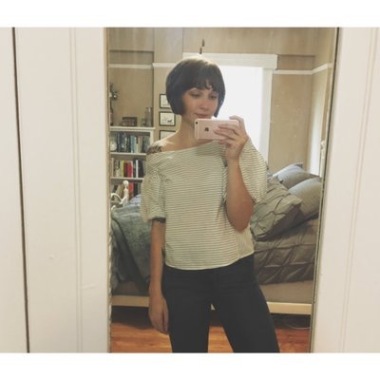 Hannah Gordon is a Detroit-based writer, coffee addict, and amateur baker. She is the managing editor of CHEAP POP. Her work can be found in Ellipsis Zine, Maudlin House, WhiskeyPaper, Synaesthesia Magazine, and more. When she’s not writing, she’s hanging out with her cat and watching cooking competitions or TV shows about vampires. You can follow her on Twitter at @_hannahnicole.