Truth and Rules by Jac Jemc

After Anthony’s comedy show, they waited for the second of two buses they’d take home.

“I didn’t like it when you yelled at that guy.” Becky was not an improviser herself, but she’d seen enough shows to know the rules.

Becky and Anthony had met in the Film, Video, & New Media Department in college, and so Anthony knew the rules for the work she made, too. Because of this, they encouraged each other to speak frankly, but each individually found the experience of stating their criticism of the other’s work uncomfortable. Secretly, they thought they’d prefer to provide each other unwavering support, looking past the inconsistencies and believing in the trajectory of the other’s creative career as a whole, allowing faith to fill in where evaluation currently resided.

Plenty of people have opinions, Becky said to herself, uncertain whether this qualified as an argument for or against.

Becky thought of how she forced herself to bite her tongue when she talked to her mother. Even if her mother contradicted herself, even if she criticized Becky for an action clearly parallel to something her mother herself had done, Becky practiced not reacting. Her mother was not asking for her opinion and she wouldn’t change even if Becky offered it, so she’d begun opting out. She provided a sympathetic ear and little more, and, since then, she and her mother had been getting along much better. Fewer phone calls ended with abrupt dial tones. Syrup-voiced terms of endearment replaced the cool greetings. The calls left her feeling empty, but not angry. She’d convinced herself this was an improvement.

She wanted her relationship with Anthony to be different, though. She wanted a partner with whom she could speak honestly about the things that mattered most. She wanted their ethics to align and so, she supposed, she also wanted the right to get upset when it seemed like they were pursuing different ideals. If his kindness fell prey to ambition, she wanted to call it out. If he noticed her valuing abstract notions of safety over real life economics, she was willing to discuss it. She had no interest in loving someone who was not willing to hash out such important and complex systems of value. And so, occasionally, quarrels ripened.

“I had to yell at him,” Anthony said. “He wouldn’t play the game. When someone pressed the imaginary button, we were supposed to spin around in our chairs.”

Becky nodded. “I got that, but you were supposed to be playing Hillary Clinton. Hillary Clinton wouldn’t yell at a talk show host for not spinning in his chair. It confused the boundaries of that character.”

“I started as Hillary Clinton,” Anthony said, “but then she got mad at the talk show host who wouldn’t spin in his chair, and I became a version of Hillary Clinton. That guy was being lazy and self-righteous. He shouldn’t be allowed to get away with that.”

“But couldn’t your coach have scolded him after the show? You focused too much on the rules. You made the scene about improv rather than about entertaining people, or even about the truth of that character.” She knew how much Anthony valued truth onstage and she hoped this comment would hit home. But Anthony also loved rules. He carried the rulebooks for new board games on his commute. He insisted on walking on the right side of the sidewalk  and refused to move until people were forced back into their “lane”. Once Becky had asked Anthony if he’d pull the shower curtain closed after bathing to prevent the liner from growing mold. After that, on the rare occasions she herself forgot to do this, he reminded her of her failure by pulling the curtain shut slowly, his eyes trained on hers. They’d laugh about it, but still Becky could sense his genuine displeasure.

On the bus, Becky felt uneasy. Tomorrow, she would leave town for a three-week shoot, and she and Anthony always seemed to grow short with each other as these periods of separation approached.

Anthony asked Becky if she was all right. “You seem downtrodden,” he said, and she laughed at the word.

“Me neither,” Anthony said.

On the walk from the bus, they saw a man, in jeans and a wool coat, running along the parked cars glancing behind him. “What’s that guy’s deal?” Anthony said. “Why won’t he walk on the sidewalk?”

“He’s probably trying to cross. Maybe his meter ran out or something.” The man made it across the street, but continued running alongside the traffic, looking back.

“What’s he doing? What a creep,” Anthony said.

Becky was sure the man would stop at the double-parked car, hazards blinking, but just short of it, he crossed back to their side of the street and darted down an alley.

Becky’s best friend had recently regaled her with the tales of suspicious characters she’d read about on her neighborhood watch website, re-introducing a fear and skepticism to Becky that she’d denied herself for a long time. She was doing her best not to let this color her instincts. In moments where she might naturally assume the worst in people, she’d been trying to compel herself to say something hopeful instead. She saw the man running across the street, subverting unspoken social standards, and she assumed he’d broken many other more serious rules, but instead she said, “I hope he’s okay.”

“Should we follow him?” Anthony asked. “I want to know what all this is about.”

Becky couldn’t help but think of Anthony onstage, reprimanding the performer who didn’t follow the guidelines, the scolding itself a variety of broken rule. She flashed to the call she’d had earlier that day in which she’d refused herself the satisfaction of calling out her mother’s habit of saying one thing and then, immediately afterward, the exact opposite. The truth, she realized, was beside the point. 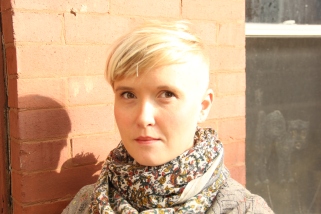 Jac Jemc is the author of The Grip of It, forthcoming from FSG Originals in 2017. Her first novel, My Only Wife (Dzanc Books) was a finalist for the 2013 PEN/Robert W. Bingham Prize for Debut Fiction and winner of the Paula Anderson Book Award, and her collection of stories, A Different Bed Every Time (Dzanc Books) was named one of Amazon’s best story collections of 2014. She edits nonfiction for Hobart.