The Live Room by Molia Dumbleton

He was in there now, fixing the new girl’s hair: arranging the end of one long, magenta curl so it landed just right between her fake tits. When did he start doing hair? There didn’t used to be cameras in the studio. You could show up in a bathrobe with mascara running down your face for all he cared, as long as you brought your voice. But there was cameras here today so this girl was all extensions and glue-on lashes. It was hard to imagine making music like that. My first album, me and him, we did it on four tracks in the bathroom of our shitty old apartment on Third Ave, with a carpet square over the sink and the cat meowing at the door. Today’s girl couldn’t make nothing in a bathroom. Nothing without multitrack. Nothing without those lashes. But you can still hear that old cat on the record if you know it’s there. 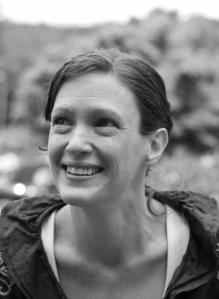 Molia Dumbleton is so thrilled to be part of the launch of Lost Balloon. Her fiction and poetry have been featured in The Kenyon Review Online, New England Review, Great Jones Street, Witness, Hobart, and others. She has been awarded the Seán Ó Faoláin Story Prize and the Dromineer Literary Festival Flash Fiction Award (both in Ireland), and has been named a Peter Taylor Fellow at The Kenyon Review and a Finalist for the Glimmer Train Very Short Fiction Award. A full list of publications and links to work can be found at www.moliadumbleton.com.